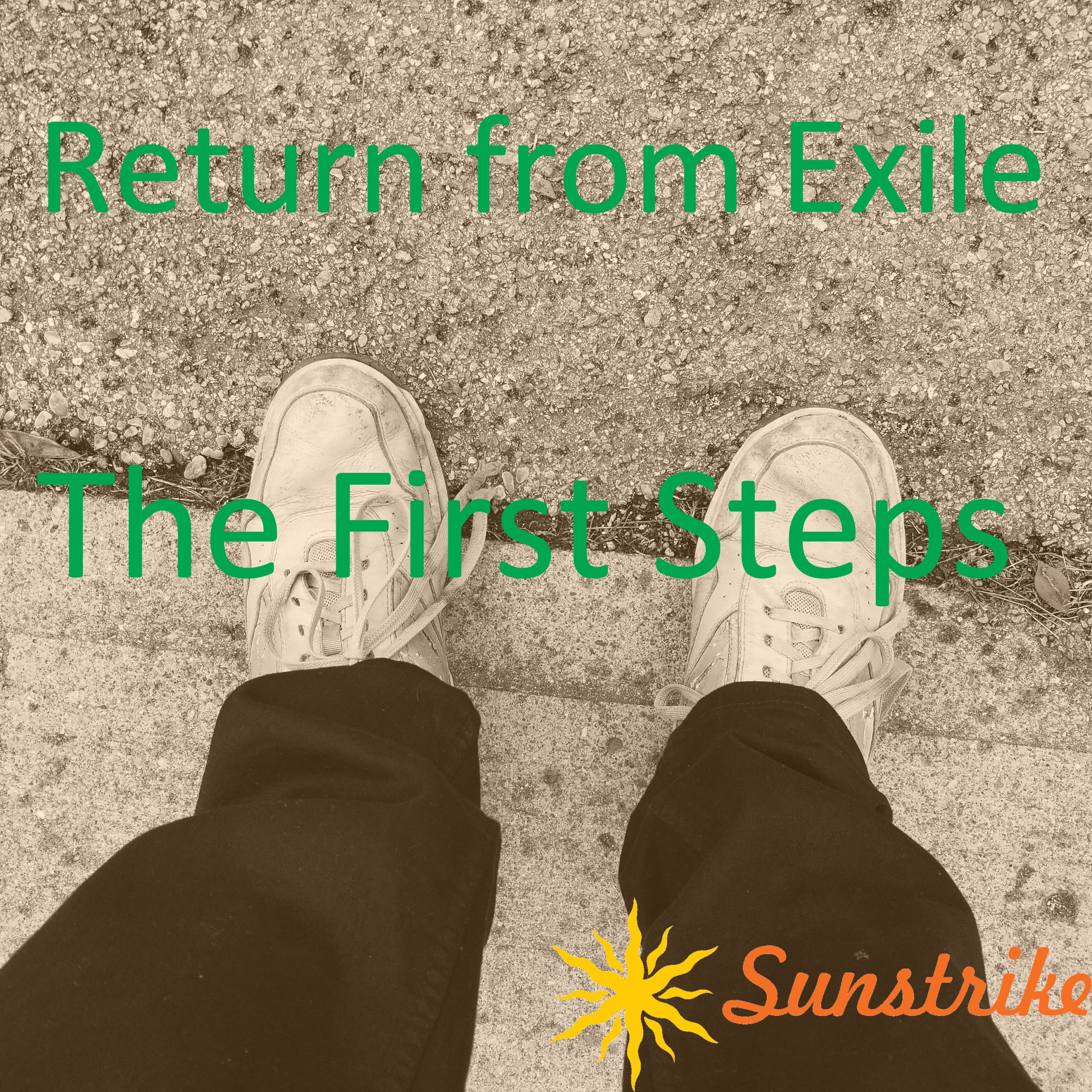 Return from Exile #1: The First Steps

I find that the first steps are often the most difficult.

Regardless of which direction you go, the first steps set the tone for the rest of the “trip.” If you stub your toe, the rest of the walk might be with an ugly black toenail working its way into falling off. Slide on some ice? You might be limping along and cradling your arm for a bit. Ten inches of snow outside? Well… If you don’t have boots, your feet might be getting wet or cold.

The challenge of this “series” – for lack of better word – is as a sequel to the last one that doesn’t just rehash the same old shit. While the last series was part “suggestions for music leaders” and part “cautionary tale” – both based on my experience – I want this one to be primarily focused on going forward. Make no mistake; I stand by everything I wrote in the last series. Every bit of it. Even the angry parts. I absolutely refuse to suppress or downplay it just because calling out The Church’s bullshit makes others uncomfortable. At the same time, that’s not where I live.

My “exile” began in June 2020. I’m not going over the details; you can find them on my blog if you’re that curious. As I just said, I’m standing by everything I wrote. This was when the COVID-19 pandemic was ramping up and many churches were moving toward either solely-online and/or outside services as the virus was going unchecked. In fact, I had just set up outdoor services when I was terminated before they even began.

Anyway… I was doing some subbing here and there in October 2020 when I had what can best be described as a close call. Fortunately for me, I did not contract COVID-19, but it drove home to me that my job – well… not so much a job as I was at this point totally a contractor – as a pianist and music director put me constantly around people and that I could very well risk bringing it home to my family… particularly the now-78-year-old mother that I care for full time. My brothers live with me, but my work had the highest risk of exposure.

After a discussion with my family, I decided it was time to stop playing inside of church buildings. Considering that the music scene had completely dried up, this essentially meant that I was deciding to stop working altogether until everyone in my household was fully-vaccinated. It was especially difficult as I had backed out of a tentative agreement to serve as an interim music minister so a church could do a proper search. From the end of October 2020 until the beginning of May, I didn’t make one cent. No gigs. Nothing.

Yes, it was hard. Thankfully, God covered the financial hit through the rest of my family, but still… Given the way COVID-19 took off – especially in churches around the community – I knew it was for the best. That doesn’t make it any easier.

Much of my life, I had taken hits from people over not having a steady job… despite the fact I was often running 2-3 different jobs while at the same time taking care of my parents. For the first time in my life, I was doing exactly what I had been accused of: deliberately not working. No, I didn’t collect any unemployment or pandemic insurance, either. As I said, I didn’t make one cent.

A week after my youngest brother was vaccinated – which was a week earlier than I should have – a dear pastor friend reached out on Facebook asking if I could sub in so his organist could attend to a family emergency. I didn’t even think about saying no. I just went out and did it. Every weekend after that – with the exception of my nephew’s graduation – I hit 2-3 church services.

When I say “hit”, I mean that I’d go and just sit in the back. I didn’t play. No mention on social media. I didn’t even tell my family or friends where I was going. Half the time, I didn’t even decide until Sunday morning. I tried not to go to the same one on consecutive weekends. (One of them did wear me down.) People were going to believe whatever they were going to; wherever I went was between me and God.

Was I truly ever alone? No. That community-wide spiritual ignominy I thought was certain from talking publicly about my previous employment situation… It didn’t really happen. There were people who reached out to me during that time and even if they didn’t understand or agree with what I had done, they sat with it. It was more important for me to be the same person publicly as I was on social media and as I was when I’m talking to God.

Isaiah 29:13 is a warning. The Lord can see through your bullshit.

If you hide behind a mask all the time, that mask owns you. Jesus is the one who purchased me, not the public at large. It’s not my job to make or keep everyone comfortable. It’s not my job to “project safeness” to protect anyone else’s ego. It’s not my job to go out of my way to not intimidate anyone. Anyone who insists I only operate at 40% – and submit to their imposed box – isn’t worth me at even 1%.

Once I started playing church services on a more regular basis, I still kept it fairly quiet. Those who knew knew. Those who asked sometimes heard yes. Whether I was paid or not. For some people, I would drive over an hour away. I didn’t take any pictures or mention it publicly. Again… It was between me and God and the churches I was serving, even if for just one week. If you were watching my social media for most of this time, “you” only ever saw me mention performing with my Salsa band.

Did I “hide” what I was doing? No. If someone tagged me, I’d leave it alone. If they mentioned something, I would acknowledge it. The point was that I wasn’t just doing it to be seen. I wasn’t doing it for the sake of playing somewhere on Sunday. I certainly wasn’t doing it for the money. (I didn’t turn down money, either.) I had an opportunity to serve God by using my gifts to help those who were with me at the time I most needed it. They were my brothers and sisters before everything went crazy and they are my brothers and sisters while it is still crazy.

About six weeks ago, I felt like God was saying “Okay. You’ve been quiet enough. It’s time.” So, I started posting my “weekend offices” publicly.

The Body of Christ is more than one service, one building, one district, or even one denomination. The sisters and brothers reach out to me to use my gifts and experience to support the ministries placed in their care. They are trusting me to support their leadership, not make it about my being seen at their expense. (That was done to me. Repeatedly. NOT fun.) Most of them at one point or another had helped me when I was doing the same thing. They did not reach out to me because of my position, especially since I don’t have one. They reached out to me because they knew I had their best interests at heart. I care about them and not just when I’m on their team playing the piano.

I guess this brings me to… Where am I NOW?

Straight out, I am trying to heal from probably the most profound betrayal of trust I ever experienced. Don’t get me wrong; most people in my circle and around me have been extraordinarily kind and gracious. Emotionally, I have been in what I can best describe as “protective” mode. I fully recognize that this is not a healthy place to be. It does describe where I am, though. I need to rebuild my ability to trust others. I need to rebuild my ability to trust myself.

Go figure… The flip side of this is that over the past year, I have felt able to trust God far more than ever before. It’s a strange paradox I’m not sure I can describe. Sure, I know that God wants us to trust Him first and foremost with everything, but does He really want us to be in a state of constant obsessive guardedness against our brothers and sisters? No. I don’t believe that. Yet, I recognize that is where I am.

Right now, I don’t know where I’m going. All I know is that I’m meant to go forward, regardless of whatever dangers may be lurking near my feet. I trust God to bring me out the other side just fine. And yes… I trust that I will be stronger and healthier because of it.

Wishing you all the best,