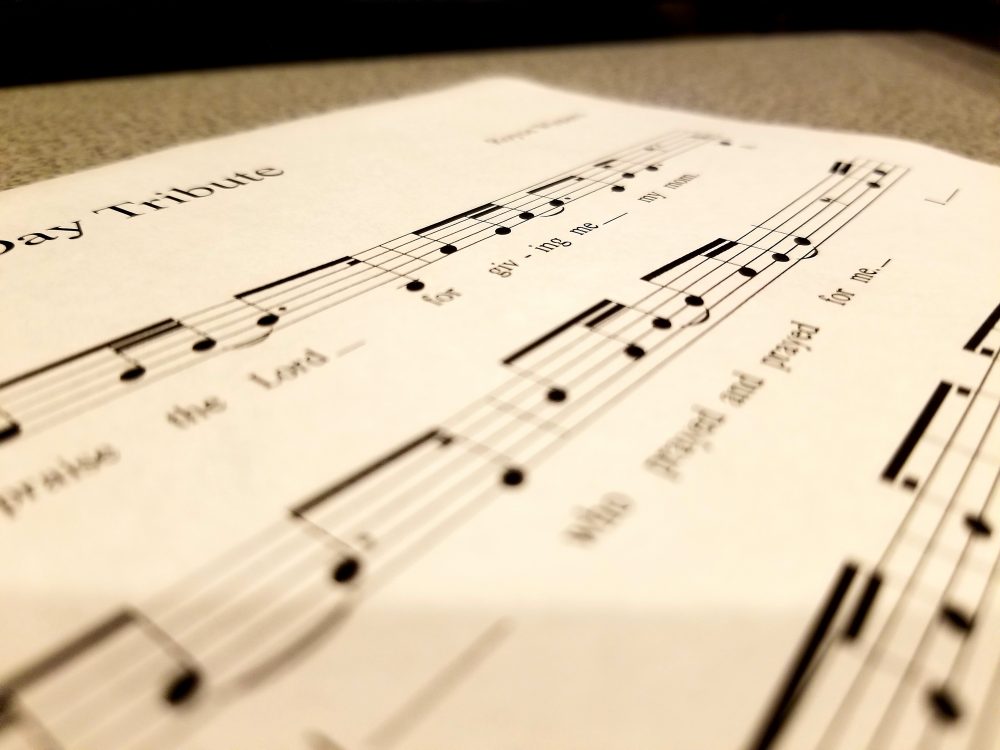 Yeah. By now, you know my sleep sucked, so we’ll just skip right on past that part. It’s going to suck tonight as well, because my alarm is set for 4:30 AM and I’m not getting to bed until I finish posting this entry and put the last load of clothes in the dryer. (Well… If I can get to sleep, that is. I already said that I was a night owl.)

I started off today by typing the handwritten transcription I did last night into the music notation program. When I heard RW’s Mother’s Day tribute on Facebook last night on a video with no accompaniment, I figured I would notate it and then give it to him when I saw him at the Catholic church this evening. While I can do it – Masters in Music Theory aka I taught classes where that was a regular assignment – I don’t do it very often unless it is something I particularly want to learn or arrange. Getting the rhythm exact is a pain in the ass. If I’m going to spend the time on it, I have to be interested in it. This particular song was short and it was meaningful to RW and I “had time” to do it, so I did it.

Dashed off from home to help a friend. There are just some things I’m going to do without thinking twice. This was one of them. Lord knows that when I needed it, people came together to make sure I had it.

Afterwards… Forgive me Lord, for I have sinned. I should have gone directly home and taken my mother out before driving an hour south to play mass in Cincinnati. Instead, RT and I were commiserating about our hunger and JM said the word “Burgermaster’s”, which was right around the corner. I don’t know if she said another word after that, because in my mind, I was already at the credit union next door to the restaurant withdrawing the money because this place doesn’t take cards. Ten minutes later, I was sitting with RT, JM, and DS inside Burgermaster and we all were indulging in gluttony. And it was glorious. Nowhere else would I eat a double cheeseburger, two wings, and a side of fried onion chips.

I was briefly tempted to pick up Mom’s lunch from McDonald’s on the way home, but my conscience wouldn’t let me do it.

So… I got home. And yes, all of the wings in that box got delivered to its intended recipient.

An hour later, I was packing up my briefcase and making my dash to Cincinnati. NW (Mrs. RW) was the cantor today, so we ran through all the service music in maybe 5 minutes. (When you’ve worked with people and certain music long enough, you all pretty much know what you’re going to do.) I handed her the transcription and told her she could give it to RW whenever she wanted… which she did maybe two minutes later. I found out he wrote it about 20 years ago and he appreciated it. Of course, it backfired on me, because then he wanted to sing through it and I hadn’t thought about harmonizing it. (Whoops.) It worked out fine and he even sang it at the end of the mass.

After mass, there was someplace else I was supposed to go… but by that point, I was just plain tapped out and thinking about everything I needed to get done to be ready for Sunday morning.

On Sunday morning, people see the band usually play 3-4 songs… about 15-20 minutes of music, provided the Breath of God doesn’t just show up and throw everything way out of whack. What you don’t see is the preparation time. Part of what I do as the director is to know what I expect of everyone to put it together, which often means their parts (as well as any I’m covering) and how I’m going to cue them or possibly work with less experienced people. I also have to take notes and solve challenges as they come up. It’s not just getting up there in front of people and having fun. In many ways, I’m also managing the flow from one end to the other. It takes time and experience and patience to do this. Sometimes, all I have going into Sunday morning is the experience. The preparation is not just the “action” of going over it. You have to know what is going to happen before you do it.

If it isn’t in your mind, it’s not happening in rehearsal, much less in the service.

I suspect in future entries, I’ll probably talk about that quite a bit more.

Peace out. And go hug the moms and mother figures in your lives. And buy them wings.