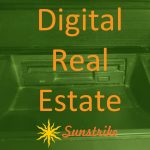 Who the hell does anything with LinkedIn? I don’t even know what to put on it!

The point is that I have amassed all this “digital real estate” – so to speak – and have barely done anything with it, save my personal Facebook page and Instagram.

For real… Does anyone really do anything on LinkedIn? Like what?

Anyway, you might have noticed something of a recent change in these areas. I celebrated Juneteenth by shutting down my social media and dodging texts and private messages after my former employer released a passive-aggressive paragraph in the church newsletter “thanking” me for my three years of service building their shit from nothing. That announcement was sent out 18 hours after they fired me.

I’ll spare most of the details, but yes, I was fired. Everything about the situation from onset to aftermath was ugly and personal. I’ll be damned if anyone is going to take my peace and get to tell my story. So, I took it into my own hands and put it out there myself.

Digital Real Estate is about taking control of your own story.

My former employer can say whatever the hell they want, but they can’t deny that a key part of their growth and success was because:

Only the Hospitality ministry had more people. My recruitment and retention rate over my three years was better than any other ministry. Everything my team managed to pull off was done with a hand and a foot tied behind our backs. Given the circumstances we had to work around, we were approaching maybe 20-30% where I expected to take us.

The reason for my firing was personal, not performance. My time with my former employer is part of my story whether they acknowledge it or not. And so is my firing. I’m going to tell my story.

So… Does this mean I’m just going to spend every post talking about my issues with my former employer? Nope. Not at all.

This may be hard to believe, but there were about forty years of life that happened before I signed on with them. That experience doesn’t just go away or become irrelevant because I’ve been cut loose. I invested my entire life learning what I have and getting knocked around, so I’m going to start sharing it. It may be about music, direction, leadership, faith, observations… Who knows? I might just post pictures of my bike or my mother’s latest crochet project.

Yes, there will be videos of me on the piano. Profanity may be involved as well. Actually, that is likely. Probably not on video.

But there’s going to be more… I’m going to start sharing what I am doing on Sunstrike Piano.

Hold up… What is Sunstrike Piano?

Aside from being yet more digital real estate that I have willfully neglected, Sunstrike Piano began as a morbid experiment in cheap digital distribution, content creation, and Facebook ads that I did for shits and giggles just to see what would happen. Yeah, I wasted some money, but I learned a few things in the process that I’m putting to use.

Perhaps even more relevantly, Sunstrike Piano is about to drop its fourth album – The Goodness of God – which will be covers of worship music. Previous releases were completely digital (recorded on a 22-year-old, 120-lb electronic piano), but for this season, I decided I was going acoustic. That will be my piano, recorded in my garage, using a mic not designed for it, and a pianist who is not a recording engineer or a piano tuner.

This experience has reminded me that I don’t have years of my life to arbitrarily give to those who “value” the results I deliver, but not me as a person. I don’t have time or mental energy to invest in projects where my work is dismissed, minimized, or undermined. I don’t have time to waste in a protracted situation where I am considered a second class citizen. I could possibly live until I’m 105; I still don’t have the time.

My remaining time on this world will be spent working on what gives me life.