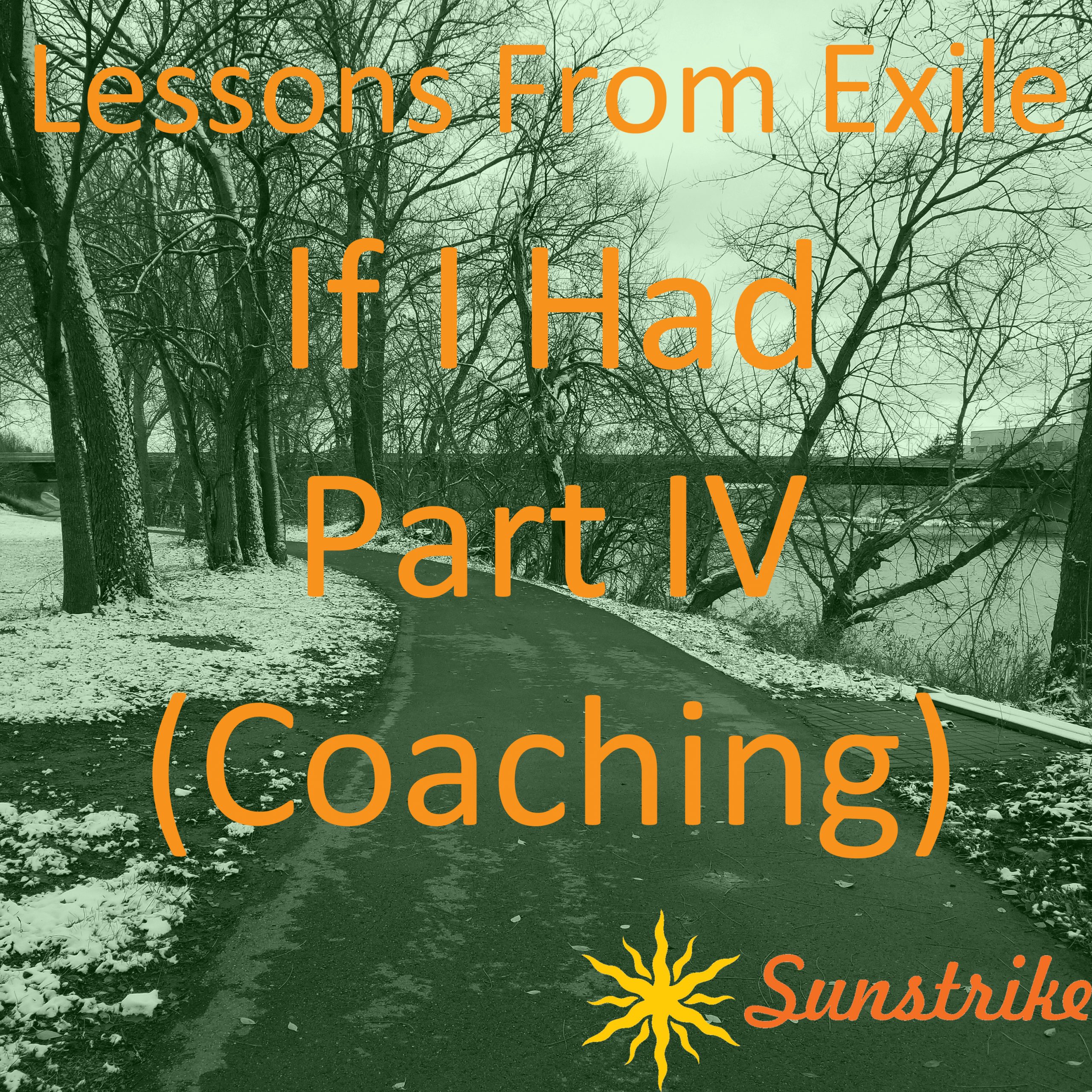 As I mentioned back in Lessons from Exile #101, I was actually reluctant to start putting the “If I Hads” out there. The fact is that I didn’t get to. Apparently, all I was there to do was to fluff my former ministry-partner’s pillow and warm my replacement’s chair. Regardless of their posturing, my former employers had no respect for me except as a grunt to do the work no one else wanted to even learn how to do. There really is little purpose in my even dropping this.

And yet, I look at how I had set things and reached out to specific people. Yeah, I’m pissed at the wasted time, the manipulation, and the sheer evil directed at me – not to mention all the fucking enabling that allows Shithead to do this again and again completely unchecked – but I also mourn what I put together – for people who didn’t want to do the work – and the direction I was prepared to take it.

A dead vision that apparently was never meant to be. If I had gone with my gut in the beginning, I could have saved myself a lot of anger and heart ache.

So… Yesterday’s installment closed by bringing up this situation where I wrote an arrangement of “No Longer Slaves” specifically tailored to my friend who is beginning on the harp. As mentioned, I took some time to speak with her, check out her instrument, see what she was used to, and get a general idea of where she was technically and musically. Then I wrote for her. If she had been a part of my (now nonexistent) church, I would have written for her at her level so she cloud play with the worship team.

While the focus was on how arranging fit into my strategy – basically of worship as a form of engagement – it also touched a bit on coaching. Remember when I said that 80% of directing music is solving problems? 15% of directing music is coaching. (Yes, the percentages are arbitrarily made up.) Now, I’m not just about my now-dead idea of coaching music directors on improving their worship programs. This is about coaching people you want to get involved in the worship program.

The friend that I mentioned… I made the time to listen to her and get a sense of where she was at. This is of the utmost importance. You have to know who you are working with. Once I was able to get a sense of where she was, then I was able to figure out how to help her. That gave me what I needed to know to write her arrangement. If I were working at a (nonexistent) church with a (nonexistent) worship team, that would also inform how I would write her part so she could play along with them.

Now let’s talk about the actual coaching. I wouldn’t just throw my friend in with the worship team and say “There you are! Now keep up!” At that point, she has her part and is working on it, I would schedule a time for her to work individually with me. I would sit at the piano, play along with her, and actually sing “No Longer Slaves” so she would get more of a sense of how her part fits with the band. Then, I would throw her a curveball like “OH NO!!! The worship leader didn’t come in immediately! What do you do?” Or “The worship leader is riffing. Now, let’s figure out what they do until they come in.” Or “Worship leader went back to the bridge!”

Not only would she be learning how to play along with the band, but she would be learning how to roll with the unexpected during live worship. It seems like a bit of a hassle to go through for just one song, but I guarantee she would be engaged and learning. Maybe a few months or two years down the line, she will have grown enough in confidence that she is holding down the chord parts with the worship team on her own.

And because I’ve taken the time to teach her, she may very well refer others to me who want to learn the exact same thing.

Coaching is also an ideal way to onboard new singers. Yeah, you can tell them to listen to the recording, which was pretty much what we had to do because we had no rehearsal space… but a recording is a different creature from a live worship band. Send the singer in with me and I put them through their paces, throw “unexpected” at them, and help them gain more confidence. (I do a lot of this during a choir rehearsal, but a coaching session allows me to individualize it and work out the best key.) We can even talk through creative ideas like where to build the song or what different feel they may like in certain areas.

Another possible scenario is in training keyboard players. This may be a hard thing to understand, but not all piano teachers teach how to read chord charts. Trust me. Yes, I know conservatory-trained classical pianists that would be lost with a chord chart. (Someone please tell me they are fixing that shit.) And just because you read a chord chart doesn’t mean you know how to navigate it while playing behind a singer or with a worship team.

Put simply, coaching is the best way to get people involved who might not be ready to just jump up there with the worship team. This is about teaching them and giving them something that is theirs forever.

What if you teach someone and they take their talents to serve at another church? You fucking congratulate them and remind them how they can reach you if they need to work out something later on. Don’t forget that it’s not just about how these people can serve you. It’s about how they can serve Jesus. And frankly, the more they learn from you, the more likely they will be sending someone else your way who might very well stay.