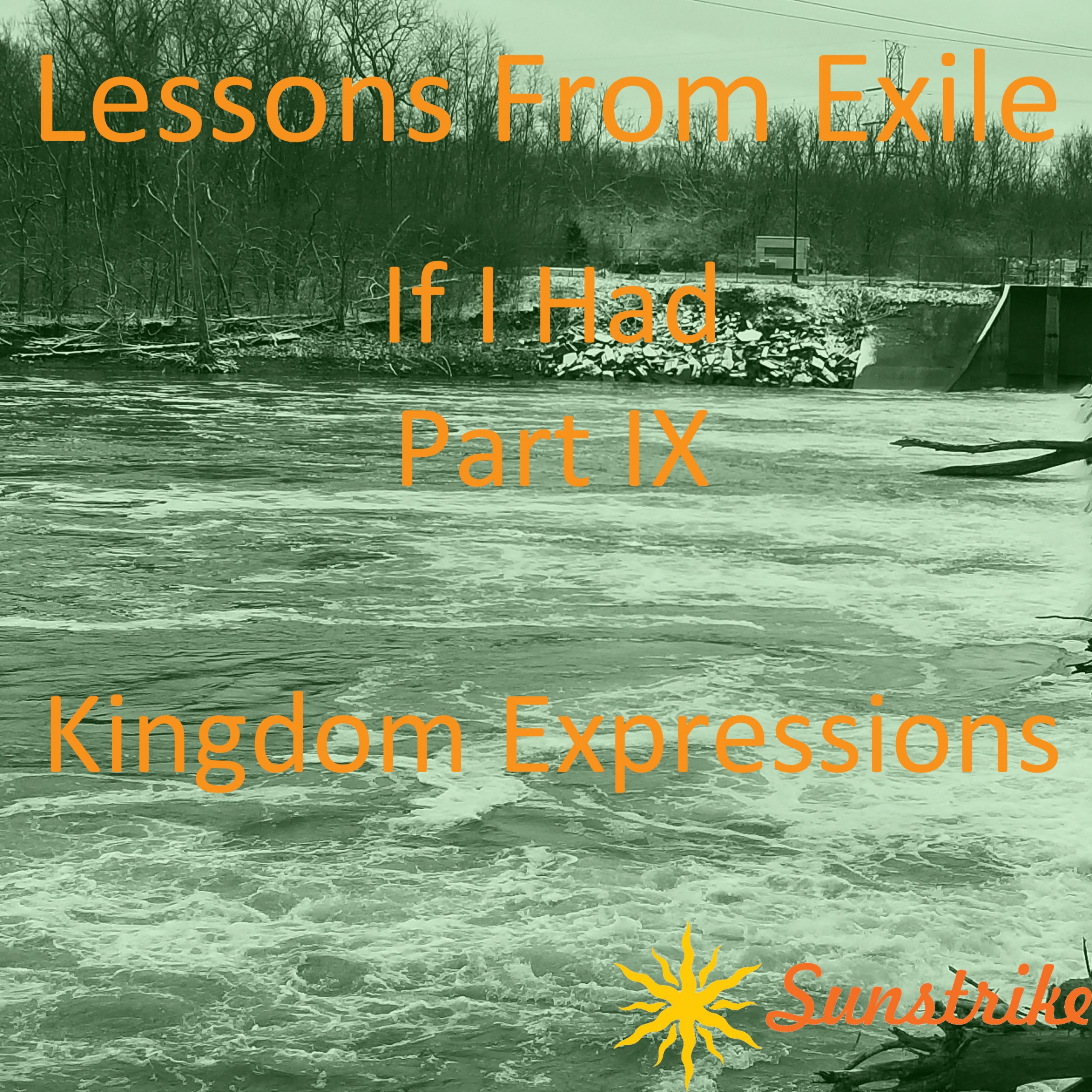 If there is one thing I have hit again and again, not only in the “If I Had” series but at many point throughout these Lessons from Exile, it is that you have to plant seeds well in advance for the fruit you hope to bear later. These seeds are – of course – primarily relationships, which like plants have to be developed and nurtured over time. People have to know that you actually and genuinely care before they are going to commit to anything. And guess what? You have to actually care, both about them and about the relationship.

Now, is everyone going to decide to start or spawn something huge, amazing, and paradigm-shifting? No. Probably not. If you actually care about them, you’ll recognize and respect their right to determine whatever level of involvement they choose to take. Healthy relationships aren’t built on pressuring or manipulating people to do whatever you want them to do. It’s based on continual invitation. Learn the fucking difference, particularly if you’re in ministry.

Even despite my lack of full-resourcing – never mind all the shit not even part of my job that Shithead continually dumped on me – I had recruited and tapped over 40+ people into various roles on the worship team. Some of them helped me lead up amazing projects that would have turned out far different if I hadn’t asked or invited them to speak into it. Off the top of my head, there was the Latin Salsa service, a (COVID-disrupted) Brazilian Portuguese service, Jazz worship, a Smooth Jazz concert… and of course, there were the drum choir and concert band that never came to be.

A couple of my friends have this regular program they put on called “Kingdom Expressions.” I hosted a couple at the mother church. The idea behind it is that everyone who creates anything is invited to present at it in front of a live audience. It’s a celebration of creativity and kind of reminds me of a cross between an old school Talent Show and a Poetry Slam. Some friends come to rap to tracks. Others read poems they’ve written or creative works. Some sing. I sang and played the guitar. (I’m a B- singer and an F- guitarist.) One friend got up and told a story. Whether original or cover… It doesn’t matter. You are invited up to present it. Even the kids did something.

Now… It really didn’t get much support from place-that-shall-not-be-named. I’m not putting it entirely on them. The logistics of not having worship space we controlled and scheduled made it difficult, especially coordinating it with two church calendars. Move beyond that and I think they missed the potential of it.

This is a form of engagement in many ways that goes beyond a “church talent show.” Remember that I said I played guitar and sang? The program was a safe space where ANYONE was invited to present ANYTHING they were working on. It wasn’t about being good. It wasn’t about judgment. It was about providing an environment where everyone could be supported and inspired in their creativity. Many of these people were either church members or came from the wider church community.

If the church had these sessions as a part of its regular schedule – monthly would do the job – or maybe even presented some of these offerings on video from time to time or as part of the regular worship service, it may have inspired others over time to put themselves out there. Now… Why is that important?

First off, not all worship is about singing and praying. Anything done to uplift Almighty God is a form of worship. If you reduce it down to simply entertainment for the masses so they will hand you money – which too many people do and won’t admit – then your entire concept of it is a gross sham based on idolatry. Yeah, I fucking said it. And yes, I fucking mean it.

And year after year I have been working in churches, I have seen first-hand people who just want to offer their voices or play instruments who are brushed aside and ignored. I have seen people who want to offer their very hearts and are completely barred from any outlet because they are not seen as “worthy” or “important” enough. And going beyond that, there are people who think they are incapable of doing anything for God because they have been told again and again through the actions of those who proclaim to be His representatives that He doesn’t want their offerings.

Church folk can be some of the greediest, selfish, most elitist, most two-faced folk on the face of the Earth. They’ll proclaim on Sunday morning as loud as everyone can hear how they LOVE Jesus and want to give Him their ALL and out of the other side of their mouths tell His people to sit down and get the fuck out of their spotlight. You can say “All are Welcome” as loud as you wish, but it doesn’t mean a damn thing if your actions don’t reflect it.

It’s really “Some are more welcome than others, depending on my personal agenda, but you are invited to watch and adore me.”

A “Kingdom Expressions” type of program may be the one place where people – whether they are central figures in the church or occasional congregants or rarer – may actually be encouraged to contribute by a welcoming community that appreciates their creative offerings and what they bring to the church.

And you know what? It may be possible that there’s a talent or skill that can be harnessed and focused to build the “ensemble” version, be it a Storytellers Symposium or Poetry Slam or Songwriters Club or Fine Arts Café or who knows what. You’ll never know if you don’t invite people and engage them.

Too many churches want warm bodies and pocket books and could give a fuck about hearts and souls.