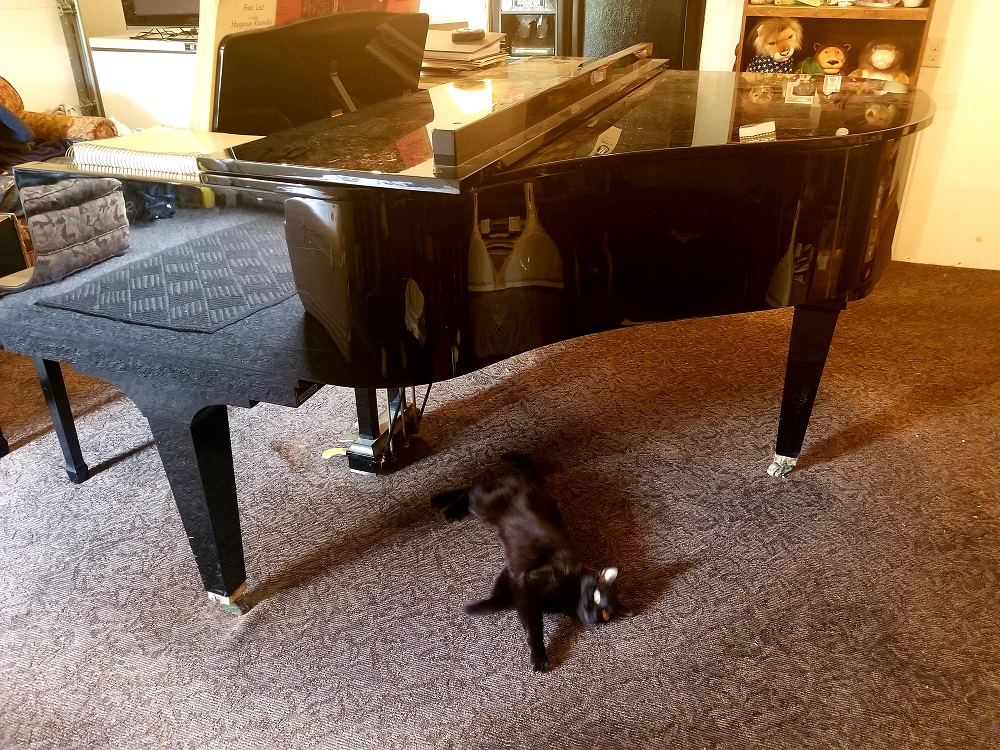 So… If you have ever looked at my website before, then you know that there are a few things that are… off. Well, if you had looked at it earlier today, it would have been WAAAAAY off. Like… There was nothing on it. Nothing. Nada. Zip. Zilcho. NOT A THING. My website – THIS SITE RIGHT HERE – was deader than Daenerys.

Too soon for the “Game of Thrones” spoiler? Though my brother WP raves about the show, I’ve never watched it. The extent of my splurging is paying for Spotify and enjoying that I get Hulu with it, even though I rarely watch television. In fact, I should probably dig up my power strip to plug the television and Roku back in. (I took the power strip with me on a gig.)

Yeah… I know… I digressed. So… Back to my website.

It’s no one’s fault but mine. This isn’t the first, second, or even the third time I’ve nuked my website. I’m trying to remember, but I am pretty sure it’s not my fourth either. I’ll have to ask CP or Gorzek how many times each one of them have saved my ass. Could I in time figure out how not to ruin my website? Yes, I probably could. I have no desire to spend the time doing it. There’s only so much room in my head for anything. The website usually doesn’t even rank on the list of priorities. This month of May is actually the most I’ve ever used it. This post will be – I think – the forty-first post I’ve published in the 12 years I have had the website. What’s the title of this post again?

So… I mentioned last week that my sight had run afoul of the space allotment on my previous host. SO… I looked into it and realized I should just change hosts, especially since I was already paying for space at this particular host that I wasn’t coming close to using. This was the first time I’ve ever changed a domain, much less moved a website. With some Google-Fu and some touching base with knowledgeable people – PS the Canadian Rock Star and Gorzek the Mighty – I had a game plan.

The logical thing would be to set the new website up and have it ready to go when the domain switched. Well… I ddn’t even see that option with ionos during the week I was waiting. It may have been there, but I will straight out say that intuitiveness is not it’s strong suit. That’s a common problem with tech companies, particularly that rely on knowledge bases that are written for people WHO ALREADY KNOW WHAT THEY ARE DOING rather than the rest of us. Still… My Google-Fu had gotten me to where I had figured out how to back up the old website and the database. I thought all I had to do was restore on the new host once the WordPress installation was up and I’d be good to go.

WHY THE FUCK DID I EVEN THINK THAT WAS A POSSIBLITY??!! Given my previous history with websites, I SHOULD HAVE KNOWN BETTER.

As I mentioned for May 20, once the domain switched and it looked like I could access the space, nothing I did worked at all. As Gorzek would say when he took a look-see, the reason was because I was dealing with a customized WordPress installation from ionos that wouldn’t recognize either my backups or the database. There was an extension I could have used to back it up that would have worked, but it cost $100. Anyone who has followed this knows I’m a church musician. I don’t have $100. Not to mention that my electric piano is in the shop… AND I JUST REMEMBERED WHILE TYPING THIS that I forgot to touch base with IB to see what is going on with it.

My mind is all sorts of out of whack now…

After a bit of messing around, I called PS the Canadian Rock Star and figured out a way to get back to the old site. Dude gave me a lecture and I’ll admit that I deserved every word of it. I’m actually a little scared that CP aka Mr. Anti-Foolishness may see this post and be reminded yet again just how much of a damn fool I am. Gorzek was the kindest to me, to which I certainly appreciate. After figuring out that it was the way, I went through and started copying over each of my posts.

Go figure… This is probably the one and only time where chronically neglecting a website actually pays off, since I’ve only had 41 posts on it over the last 12 years. Of course, in order to pull it off, I had to use two different browsers. I used Chrome to access the old website – using a Virtual Host for Chrome – and then Microsoft Edge in order to access the new website.

Just gotta say… MICROSOFT EDGE IS SHIT. No access to the clipboard? COME ON. So, I’m copying all this stuff an completely losing all the formatting when I paste it into your interface. What the HELL, Microsoft? STUFF LIKE THIS IS WHY I STOPPED USING INTERNET EXPLORER. Even now, I’m going to copy this post THAT I TYPED IN MICROSOFT OFFICE 365 into the website on Microsoft Edge and I’ll lose ALL the formatting.

Yeah… I know… I gotta be careful with that mouth of mine. I was gritting my teeth even while typing this.

Anyway, I copied all my posts over – sans formatting and all the photos and videos put in – and then just went ahead and published them as-is rather than wait until I’ve gone back through and corrected them. The photos I was able to just pull out of the backup files from the old website. The videos will take a bit more doing because those were YouTube links. The biggest pain is going to be going through and redoing the formatting.

I’m also seeing that much of this interface is different from what I’m used to. It will probably be a while before the website looks okayish. We’ll see.

That said… This post has gone on long enough.